I’ve been getting a lot of questions about the status of “Non-lexical lifetimes” (NLL) – or, as I prefer to call it these days, the MIR-based borrow checker – so I wanted to post a status update.

The single most important fact is that the MIR-based borrow check is feature complete and available on nightly. What this means is that the behavior of #![feature(nll)] is roughly what we intend to ship for “version 1”, except that (a) the performance needs work and (b) we are still improving the diagnostics. (More on those points later.)

The MIR-based borrow check as currently implemented represents a huge step forward from the existing borrow checker, for two reasons. First, it eliminates a ton of borrow check errors, resulting in a much smoother compilation experience. Second, it has a lot less bugs. More on this point later too.

You may be wondering how this all relates to the “alias-based borrow check” that I outlined in my previous post, which we have since dubbed Polonius. We have implemented that analysis and solved the performance hurdles that it used to have, but it will still take some effort to get it fully ready to ship. The plan is to defer that work and ultimately ship Polonius as a second step: it will basically be a “MIR-based borrow check 2.0”, offering even fewer errors.

If you’d like to be involved, we’d love to have you! The NLL working group hangs out on the #wg-nll stream in Zulip. We have weekly meetings on Tuesdays (3:30pm Eastern time) where we discuss the priorities for the week and try to dole out tasks. If that time doesn’t work for you, you can of course pop in any time and communicate asynchronously. You can also always go look for work to do amongst the list of GitHub issues – probably the diagnostics issues are the best place to start.

As I mentioned earlier, the MIR-based borrow checker fixes a lot of bugs – this is largely a side effect of making the check operate over the MIR. This is great! However, as a result, we can’t just “flip the switch” and enable the MIR-based borrow checker by default, since that would break existing crates (I don’t really know how many yet). The plan therefore is to have a transition period.

During the transition period, we will issue warnings if your program used to compile with the old borrow checker but doesn’t with the new checker (because we fixed a bug in the borrow check). The way we do this is to run both the old and the new borrow checker. If the new checker would report an error, we first check if the old check would also report an error. If so, we can issue the error as normal. If not, we issue only a warning, since that represents a case that used to compile but no longer does.

The good news is that while the MIR-based checker fixes a lot of bugs, it also accepts a lot more code. This lessens the overall impact. That is, there is a lot of code which ought to have gotten errors from the old borrow check (but never did), but most of that code won’t get any errors at all under the new check. No harm, no foul. =)

One of the main things we are working on is the performance of the MIR-based checker, since enabling the MIR-based borrow checker currently implies significant overhead during compilation. Take a look at this chart, which plots rustc build times for the clap crate: 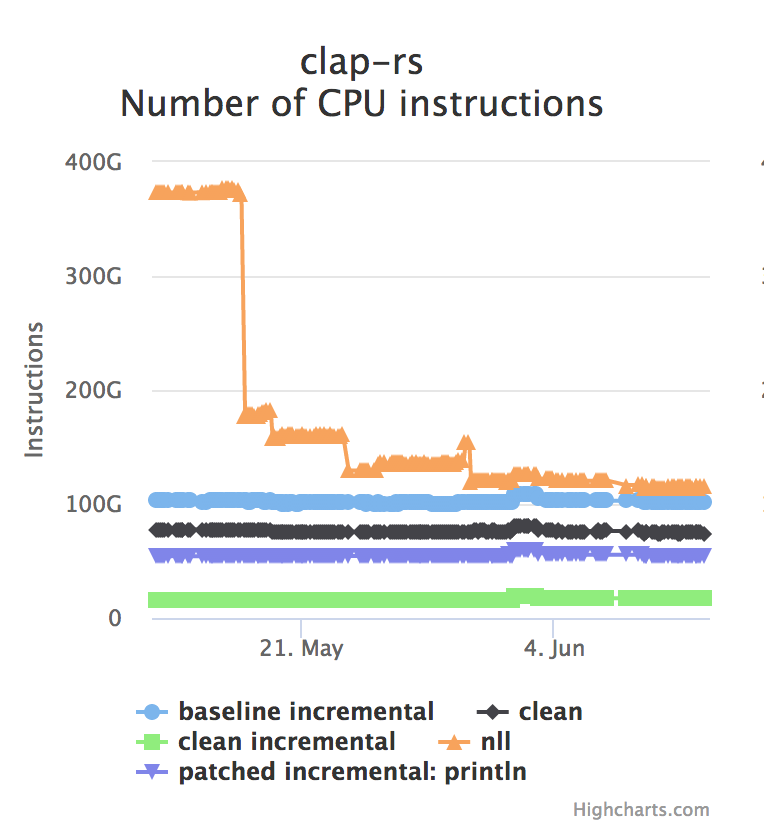 The biggest problem at this point is that we effectively have to “re-run” the type check a second time on the MIR, in order to compute all the lifetimes. This means we are doing two type-checks, and that is expensive. However, this second type check can be significantly simpler than the original: most of the “heavy lifting” has been done. Moreover, there are lots of opportunities to cache work between them so that it only has to be done once. So I’m confident we’ll make big strides here. (For example, I’ve got a PR up right now that adds some simple memoization for a 20% win, and I’m working on follow-ups that add much more aggressive memoization.)

(There is an interesting corollary to this: after the transition period, the first type check will have no need to consider lifetimes at all, which I think means we should be able to make it run quite a bit faster as well, which should mean a shorter “time till first error” and also help things like computing autocompletion information for the RLS.)

It’s not enough to point out problems in the code, we also have to explain the error in an understandable way. We’ve put a lot of effort into our existing borrow checker’s error message. In some cases, the MIR-based borrow checker actually does better here. It has access to more information, which means it can be more specific than the older checker. As an example1, consider this error that the old borrow checker gives:

The new error doesn’t tell you “how long” the borrow must last, it points to a concrete use. That’s great.

Other times, though, the errors from the new checker are not as good. This is particularly true when it comes to suggestions and tips for how to fix things. We’ve gone through all of our internal diagnostic tests and drawn up a list of about 37 issues, documenting each point where the checker’s message is not as good as the old one, and we’re working now on drilling through this list.

In my previous blog post, I described a new version of the borrow check, which we have since dubbed Polonius. That analysis further improves on the MIR-based borrow check that is in Nightly now. The most significant improvement that Polonius brings has to do with “conditional returns”. Consider this example:

In this example, vec is borrowed to produce r, and r is then returned – but only sometimes. In the MIR borrowck on nightly, this will give an error – when r is returned, the borrow is forced to last until the end of foo, no matter what path we take. The Polonius analysis is more precise, and understands that, outside of the if, vec is no longer referenced by any live references.

We originally intended for NLL to accept examples like this: in the RFC, this was called Problem Case #3. However, we had to remove that support because it was simply killing compilation times, and there were also cases where it wasn’t as precise as we wanted. Of course, some of you may recall that in my previous post about Polonius I wrote:

…the performance has a long way to go ([Polonius] is currently slower than existing analysis).

I’m happy to report that this problem is basically solved. Despite the increased precision, the Polonius analysis is now easily as fast as the existing Nightly analysis, thanks some smarter encoding of the rules as well as the move to use datafrog. We’ve not done detailed comparisons, but I consider this problem essentially solved.

If you’d like, you can try Polonius today using the -Zpolonius switch to Nightly. However, keep in mind that this would be a ‘pre-alpha’ state: there are still some known bugs that we have not prioritized fixing and so forth.